A little old lady sat across from us on the public bus.  “You have four children?”  I smiled and replied which began a stream of statements and  a question.  “Two look like you.  Two don’t.  All four of them are your children?”  I again explained that yes all four children are mine.  I asked her about her children, now all grown and working at a university in a different city.  “Your children” she began again, “two have blonde hair, two have black.  Those two look the same the other two look alike.”

It became amusing to watch her try to put all the pieces of our family puzzle together.  I silently wondered how long to let her worry the facts and when to explain.  Adoption is as foreign to some people here as Hubby’s red hair.  Even when we tell them our two youngest children are ours through adoption, they do not understand.   We have joked that people would understand and believe it more if we told them when you live in America children come out looking American, when you live in China they come out looking Chinese!

Although there have been many conversations similar to our chat with the sweet lady on the bus, we have been pleasantly surprised.  We came expecting negative remarks towards adoption.  A common phrase is “throw away children.”  We of course want to guard Little Monkey and Little Man from that idea which could harm their identity and self worth.  I was ready with much affirmation and quick replies in the case of a conversation turning toward hurtful words.  But I wasn’t expecting folks to simply not understand the idea of adoption.  What a different conversation to have, but I must say we talk more about our “large” family rather than about adoption.

The word we hear the most while out and about….”four?”

Having four children is almost as surprising as us not looking all alike.  Because of the one child policy, most Chinese families have one child.  To see a mother on a bus with four children in tow is a sight to behold.  It puts all my good graces to a test.  Nothing like an entire bus watching the antics of my children and how I parent them.  You could pr@y for me when you think of that.  I would appreciate it!!

So, the Chinese words that I have used most in the ten days we have been back in China. “yes, four!”  I need to learn the phrase “How blessed am I!”  🙂

2 thoughts on “Four! Four? Really, you have four?” 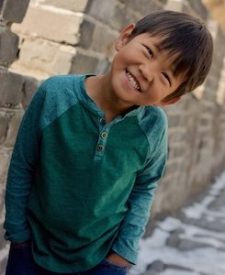